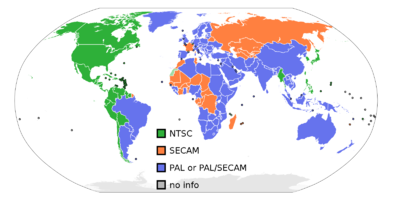 Regions of the world which used the different encoding systems. SECAM is not applicable to the Smash series, and should be assumed as an extension to the PAL region.

Each game in the Super Smash Bros. series has its own list of regional version differences.

Many games developed in Japan usually see a Japanese release first. These usually have different text, names, sounds, and minor aesthetic changes from the NTSC and PAL versions. The initial Japanese release of the game may naturally come with some initial bugs, and minor to major changes may be seen in future regional releases.

Within the video gaming community, "NTSC" refers to the region of North America and small parts of South America and Asia. The term comes from the analog television encoding system National Television System Committee, the primary method of encoding analog TV for North America, South America, and Japan. As the Japanese NTSC system is slightly different from the international system, NTSC is most commonly used as shorthand for "the American version of a game". Historically, North America is usually the second region for games made in Japan to be released; compared to the many European languages that require their own translations, only a few languages (English at least, and potentially Spanish and French) are necessary for one of the largest markets. As a result, NTSC releases are often the second version of the game, with major bugs fixed and possibly minor changes added. Since a majority of NTSC regions generate electrical power at 60 hertz, NTSC versions have historically been regarded as the best performing versions, with faster gameplay and a smoother framerate.

"PAL" is a term referring to the region of Europe, Asia (minus Japan), Africa, Australia and some of South America. The term comes from the analog television encoding system Phase Alternate Line, the primary method of encoding analog TV for these parts of the world. PAL is most commonly used as shorthand for "the European version of a game". Historically, Europe is usually the third and final region for games made in Japan to be released, as games have to be translated into several languages, a process that takes both more time and more space than the NTSC region. In addition, due to cultural differences, the English translation cannot always be simply copied from the American version of the game. As a result, PAL releases are often the final version of the game, with all known bugs fixed and possibly significant changes added. Before the global standardization of electrical power to 60 hertz during the 2000's, a majority of PAL regions generated electrical power at 50 hertz, making these versions slower and choppier then the NTSC versions. Due to the technical issues of plugging a machine into a system that outputs an amount of electricity it was not designed for, hardware manufacturers mitigated this issue by "region locking" a system, or programming it to refuse to work if a foreign coding is detected. All Nintendo home consoles before Nintendo Switch, and the corresponding Smash titles by extension, were region locked, with Ultimate being the first in the series to be region-free out of the box.

While analog connections are not commonly used for gaming consoles anymore, with the Nintendo Wii being Nintendo's last console to support them, the terms "NTSC" and "PAL" are still commonly used to refer to differences between the American and European/Australian versions of any particular game. In general, the NTSC version of each game is the standard used for competitive play on the international level. However, as different regional versions may contain significant gameplay differences, there is some debate about whether all regions should use the NTSC standard or their own respective regional versions (as is the case with the Japanese competitive scene for the original SSB).