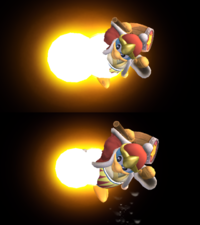 The two hitboxes of Dedede's bair.

King Dedede sticks out a foot behind himself, doing 13% damage with the initial hitbox and 9% with the subsequent hitbox. It functions as a sex kick due to becoming weaker the longer it is out, but the knockback does not decrease that much. The move has far horizontal reach, a long-lasting hitbox, strong horizontal knockback, and very fast startup. The move is great for edgeguarding and can be used as a WoP technique at low percentages in conjunction with his forward aerial. It also has above average KO power and is a reliable KO move when not stale. While the move has minor landing lag, it is difficult to punish. It is considered to be one of the best back aerials in the game, and also King Dedede's best attack.