From SmashWiki, the Super Smash Bros. wiki
(Redirected from H2YL)
Jump to navigationJump to search 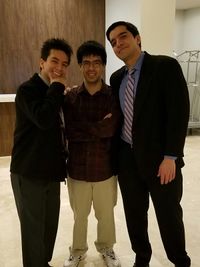 Ha Ha You Lose, abbreviated H2YL, was a crew situated in Virginia around the early days of competitive Melee. It was considered to be one of the most powerful crews, along with Deadly Alliance, and its players would consistently place among the top in larger tournaments. The crew has since been discontinued, although the past members remain in contact and continue to perform extremely well in modern Melee tournaments.

Each member was notorious for their extremely smart gameplay, metagame innovations, and contributions to the Smash community. Azen was able to play virtually every Melee character at the top level, showing multitudes of strategies for nearly the entire cast that many other players had not yet discovered at the time, and was one of the first smashers to utilize L-canceling. Chillin (known at the time as Chillindude829) was considered the premiere Fox main in the region, bringing his character to the next level with highly technical combos and movement, and popularized many strategies that are still seen in high-level Fox play. Finally, ChuDat was known for his outstanding use of the Ice Climbers, and for some time, was considered to be the best Ice Climbers main in the world. Although many other professionals at the time considered the Ice Climbers to be a low-tiered character, ChuDat showed how dominating their grab game and movement are; his advancements moved the Ice Climbers up the tier list by a significant margin.