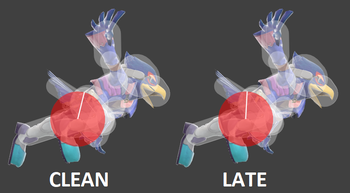 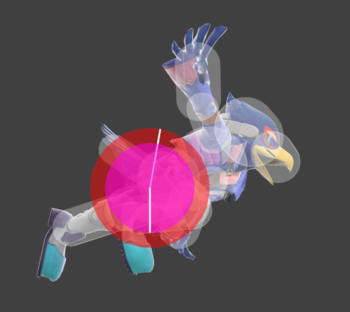 The hitbox is attached to the afterimages, which are considered a non-reflectable projectile that trails behind Falco. As a result, he does not experience hitlag from hitting an opponent with it, and it can clang with aerial attacks.

When hitting a shield, in addition to stopping Falco's movement, the move skips to frame 19 (24 in the air) on the next frame if the hit happened beforehand, cutting off at most 5 frames.

Jostling is disabled during frames 12-30.

The move enables ledge grabs starting on frame 18 from the front, and frame 23 from behind. Jostling is also disabled during frames 17-35.