So a Debate has gone up about which profile Image should be used for Simon: his Chronicles Artwork or his Grimoire of Souls artwork. I was initially against this since its taken directly from Ultimate, as his spirit Artwork. However since it does match his smash appearance more, and the rules are we need to use their most recent art that closely matches their Smash appearance, i'm unsure how we should handle this. Should we use character spirit images for a characters main profile image in the event ti closer matches their smash appearance? Or, since the image it self came from being data mined from a smash game, should it be treated as a trophy and be exclusive to the spirits pages?
Ixbran (talk) 18:01, 8 December 2018 (EST)

To use a point of reference, Ridley uses the same Zero Mission artwork featured in his Fighter Spirit (and, before that, his Sticker), demonstrating that it doesn't have to be mutually exclusive. Since the Simon Fighter Spirit uses artwork directly taken from Grimoire of Souls (instead of original artwork created for Smash, such as Carmilla), I believe it should be safe to use on the main Simon Belmont page. The only reason I can think to not use it is because Grimoire of Souls has not yet been released (I think it's currently in beta), so it's not "technically" his most recent game as of this writing... but is that really an issue if the artwork is already available in a released game? --PeabodySam (talk) 18:15, 8 December 2018 (EST) 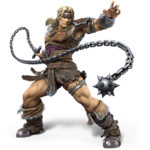 ahh, i see, i wasn't aware of Ridley's artwork being the same in that regard. I guess its also a matter of pride, I edited the current artwork from an old box-art scan and had to get approval from multiple admins for it to be approved since it was the only full body artwork of him, as there's a rule about using unedited artwork for profile pages. I don't want to see it go to waste. But you do bring up a good point about it being his artwork for Grimiore of Souls, again, it is also closest to his smash appearance and so it needs to be used.

Though, looking over his smash art i am noticing some thing interesting. His Chronciles artwork features brown and purple leathers, while his GoS artwork is brown and red. his Ultimate design uses both red, purples, and browns at once. With some design elements unused in GoS. In smash he has the leather chest piece with the shoulder pads, like GoS, but wears a purple under-shirt like his Chronicles design. With a thick crimson belt around his hips, similar to the crimson under-shirt in his GoS artwork. the strips of leather hanging from his right hip is similar to his GoS design, but features the same purpilish ornate patterns from the hip-straps of his Chronicles artwork. You think this could be a situation similar to Zelda? (Who is designed to be a combination of her ALBW and ALTTP design). Or am I just seeing things?
Ixbran (talk) 18:29, 8 December 2018 (EST)

Perhaps. If you would like, you can try including the Chronicles artwork in the "Character description" section, similar to the compromise with Zelda's page. After that, it's up to the discretion of the staff whether or not it's significant enough to be kept on the page. And don't worry, I completely understand about the "matter of pride"; I can see that a lot of effort went into editing the background out of the artwork, and I agree that it would be a shame to let it go to waste. --PeabodySam (talk) 19:05, 8 December 2018 (EST)

Including his chronicles artwork in the character Description section, like how we do on Zelda's page, would sit fine by me. and yeah I appreciate the acknowledgement of the work i did with his art. It took me days to find the full body version of that image, and it was smaller than what we had before, but i was able to make it work even sizing it up some.
Ixbran (talk) 19:35, 8 December 2018 (EST)