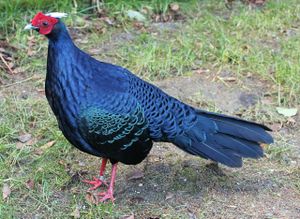 That ain't is Falco

One year late, but yes, it does look like Falco is a Vietnamese Pheasant. Rtzxy

While Avian is a term to refer to birds, that's only a generalization and I do personally think Falco is a Blue Falcon, exactly what it says on the tin Kappa. I wouldn't mind calling it a Pheasant either though. Dots (talk)