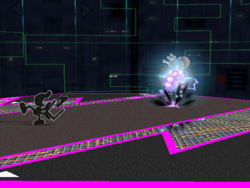 The result of the glitch, propelling Mr. Game & Watch and stunning Ness.

The kamikaze glitch is an exploit in Super Smash Bros. Melee that can be performed with Mr. Game & Watch and Ness. To perform it, Mr. Game & Watch absorbs three of Ness's fully charged PK Flash attacks with Oil Panic. Then, Ness (or any other character) puts up his shield. Once Mr. Game & Watch unloads his bucket onto the shielding opponent, Mr. Game & Watch will fly across the screen with blinding speed (due to the very high amount of momentum or knockback units generated by the attack making contact with Ness's shield), instantly KOing any opponent in his path as the residual hitbox from the oil strikes opponents he passes by. This can also be done with Samus's Charge Shot, Mewtwo's Shadow Ball, or with a fully charged Super Scope, but with decreased efficiency.

In Brawl and Smash 4, this will not work because the damage output of Oil Panic is capped at 60% respectively. As a result, Mr. Game & Watch will only get pushed a moderate distance. However, when an attack is hacked to deal ridiculously high knockback (such as Ganondorf's Warlock Punch in Brawl Minus), and connects with an opposing shield, the user will be sent flying back at incredible speeds, similar to the kamikaze glitch. This shows that the kamikaze glitch is not actually a glitch, but rather an extreme exploitation of the game's physics (specifically the power of a shielded attack determining how far the character is pushed back). It can therefore be expected that hacking to increase the max damage would return the effect with a proportionate value of knockback units.