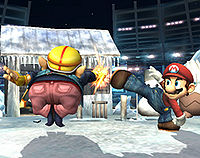 A glancing blow (チップ, chip), known in Super Smash Bros. Melee as a phantom hit, is the result of a hitbox making insufficient contact with a damageable object – that is, the attack's hitbox does not connect deep enough into the target's hurtbox to be considered a solid hit. Glancing blows are rather rare and almost always accidental. Depending on the game and circumstances, they can range from causing no damage to having no ill effect. It is understood that glancing blows only occur between hitboxes and hurtboxes, and not between hitboxes and reflectors or absorbers. Glancing blows can occur with any hitbox or hurtbox, including those of stage hazards or items.

Glancing blows do not exist in the original Super Smash Bros. in any form.

Glancing blows in Melee. This animation demonstrates four different occurrences each with a different result.

In Melee, glancing blows are commonly called "phantom hits", as they weren't given an official name until Super Smash Bros. Brawl. Such hits occur when a hitbox connects less than 0.01 units through a hurtbox and do half damage with no knockback or flinching, with the attacker not subjected to any freeze frames (but the defender is). There is nothing indicating that a phantom hit was made and the damage dealt by it is not applied until the defender's freeze frames run out, allowing the move a chance to connect fully on a later freeze frame. A phantom hit does not count as hitting the target, so this behaviour can cause the move to hit twice (once with the phantom hit and again with the proper hit) if full contact is made after freeze frames have ended and phantom hit damage has been applied - this requires the move to have a hitbox that lasts longer than the freeze frames it applies. It is possible to SDI during the hitlag, but only if already in a knockback action from being hit with something else. Phantom hits can never be ASDIed. A phantom hit will count toward the stale moves queue.

Some characters with enough multi-frame attacks happen to benefit from a glancing blow. Examples include Link's up special, as well as that of his clone, Young Link, to a lesser extent. Marth, Sheik, Peach, Captain Falcon, Dr. Mario, Luigi, Mario, Roy, and Bowser's down smashes also exhibit this trait.

In Brawl, glancing blows occur when hitboxes connect less than 0.1 units through a hurtbox, happening far more easily than in Melee, and make a very quiet "chik" sound as well as producing small orange sparks. They also deal no damage at all and do not produce freeze frames for the defender; this removes the double-hit effects that Melee had. As the "chik" and sparks occur on the first frame of the hit, it is possible to see an attack have a glancing blow on one frame and a solid connection on the next (as opposed to Melee, where this was undetectable at game speed). In general, glancing blows count as the attack not hitting, and have absolutely no effect other than previously described.

The superhuman precision enabled by tool-assistance effectively allows a player to control much of the extreme difficulty inherent in forcing a glancing blow. This has led to the creation of gameplay videos, particularly of Melee, consisting almost entirely of glancing blows.

In TAS videos of the Home-Run Contest, strategies commonly consist of bat dropping while forcing a glancing blow (of the type that allows the dropped bat to hit twice) repeatedly, effectively allowing the player to inflict much more damage than otherwise probable in real time.