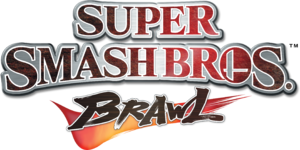 The Super Smash Bros. Brawl Main Theme is, as the name implies, the main theme of Super Smash Bros. Brawl, playing in the opening movie and The Great Invasion cutscene. It was first heard alongside the reveal of Brawl itself in the game's first trailer at E3 2006, before being posted on the Smash Bros. DOJO!! much later. The song was composed by Final Fantasy series composer Nobuo Uematsu, and its lyrics were supervised by Super Smash Bros. series director Masahiro Sakurai. The translated lyrics are seen in the closing video of the Subspace Emissary, just before the credits. The melody is used in many of Brawl's original songs, albeit usually without the lyrics.

While the original song does not return in Super Smash Bros. 4, it returns as selectable menu music in Super Smash Bros. Ultimate (after clearing World of Light). Its various remixes from Brawl return as selectable music in for Wii U and Ultimate for the main menu, Battlefield, and Final Destination. The song is also incorporated into the credits medley in both versions of SSB4.


Ille
iuxta me.
Ille iuxta me.

The end game credits of The Subspace Emissary feature localizations of the lyrics, as follows:


I've heard legends of that person
How he traveled the breadth of the land, reducing all he touched to rubble


Now my friends are with me
Some of them were once heroes
Some, my mortal enemies


And as we face each other in battle, locked in combat
We shine ever brighter


Hear the fame of that one
He ran, destroying everything he touched


And by contesting and fighting fiercely
our splendor grows.