I've been hearing rumors that Charizard, Squirtle, Ivysaur, Lucario, Pikachu, and Jigglypuff (all Playable Pokemon) are affected by their in-game Elemental weaknesses. I.e Charizard takes heavier damage from Pikachus' Thunder and Squirtles' Surf, whereas he'll take less from Lucario's Aura attacks and Ivysaur's Razor Leaf. Is there any truth to this? If so, should it be mentioned?

I can't easily find the previous picture that was there, so should I use this one:

If you can tell that it's edited we shouldn't use it, is it noticable. Click it to see what picture it was edited from. You can tell if you know where to look but tell me what you think at first glance. I also cropped out a Squirtle picture and edited an Ivysaur and I'm asking for feedback on their SSBB pages. I'll go ahead and put it in for now if no one provides feedback.

There is also this: 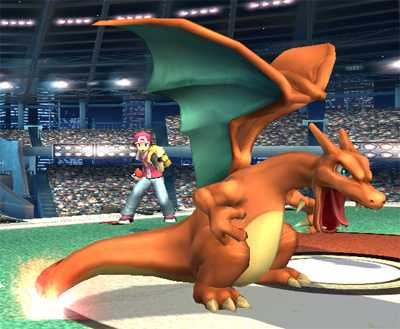 It might look more similar to the edited Squirtle and Ivysaur because the angle is closer, and it's not edited, but Pokemon Trainer is in the picture, which kind of makes my vote for the edited one.Metallic Igloo 04:40, 2 March 2008 (UTC)

When I was recently toying with Pokemon Trainer, I think I found some Super Armor frames during Charizard's Foward Smash. I haven't tested it specifically to find these frames, and was wondering if anyone had tested this already. Rakath 07:38, 3 April 2008 (UTC)