From SmashWiki, the Super Smash Bros. wiki
< SmashWiki:Article of the Week
Jump to navigationJump to search 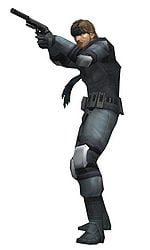 Snake's world-famous image as a action-hero tough guy is in direct contrast with the more colorful themes of first-party Nintendo characters in the Smash games.

Solid Snake (Japanese:ソリッド・スネーク, Soriddo Sunēku), whose real first name is David, is the main playable protagonist in the famous third-party Metal Gear stealth series created by Konami. Previously popularized as a character to serve as an antithesis to the cheery and colorful Nintendo-inspired characters that were prevalent in games near the end of the 1990's, special forces operative Solid Snake has become the first-revealed third-party character to feature as a playable fighter in the Nintendo fighting game Super Smash Bros. Brawl.