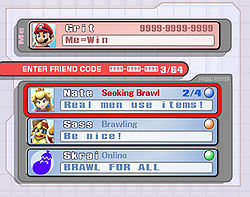 On the very bottom, a player can leave text, as to leave a message, or to chat between friends. If one selects their own profile, they will be able to write text that will show up when they taunt. There can be four different texts, one for each taunt (the two side taunts can be used to input different text for each).