From SmashWiki, the Super Smash Bros. wiki
< User:Xtra3678
Jump to navigationJump to search

For the other special moves a similar name, see Reflect Barrier. For the property in moves where a move reflects projectiles, see Reflection.

When used, the user surrounds himself in a energy field that reflects any projectile that touches it. It can also be used to damage enemies in close proximity to the user when activated. If this shield deflects too many projectiles in one use, or if its user attempts to reflect a projectile of sufficient power (such as a constantly reflected Red or Green Shell), it will shatter, like a normal shield, and leave the user stunned. In Brawl, the Reflector does not shatter. Rather, it simply ceases reflecting projectiles. It was revealed that the shield originates from a small device the user carries. How it is used and its effects depends on the user.

Fox's Reflector creates a blue hexagonal shield around himself. Fox can keep the Reflector active for as long as he wants, and using it in midair slows his falling speed (this works by reducing his air speed and resetting his downwards acceleration).

In Super Smash Bros., the Reflector cannot be jumped out of, and is instead canceled instantly upon landing on the ground. Since the reflector cancels all momentum, it is quickest to immediately use the reflector after jumping; Fox will then instantly use the reflector and land-cancel the move. Additionally, while it will reflect most thrown items, it cannot reflect or protect against explosions. Aside from these two aspects, the Reflector is functionally the same as in Melee.

In Melee, Fox can also jump out of his reflector, like with regular shields, which is what allows waveshine combos. The reflector multiplies a projectile's damage and knockback by 1.5 when reflected. If the projectile is reflected several times, his reflector may break, similar to a shield breaking, except in Brawl, where the projectile just passes through the reflector and damages Fox normally. When used near a foe in the first frames, it deals 6% damage with a slightly angled down horizontal angle (being a semi-spike), set knockback and a sparkling effect. The Reflector is often used for shine spikes in edge-guarding, which involve using the Reflector's damaging properties to knock recovering enemies downwards. It is also extremely useful against bosses, considering most of their attacks are projectiles. Fox's Reflector also grants him 1 frame of invincibility when used at the beginning.

While the reflector is active, Fox's falling speed is altered: Fox falls and accelerates more slowly; this is the reason that the Chillin dash works. In Brawl, the move's ending lag was decreased, so Fox can effectively hover and stall in the air by repeatedly using his reflector. The slowed falling speed, mixed with the damaging aspect of the Reflector, can prevent Fox being juggled. Fox can also turn in midair when repeatedly activating the reflector. However, shine-spiking in Brawl is much less useful due to a combination of the reflector's damage affected knockback, longer recoveries, and floatiness, though it can be used immediately while hanging on a ledge.

In Super Smash Bros. 4, Fox's reflector was given much more ending lag, comparable to his Reflector in Melee, to prevent stalling in the air. It also no longer semi spikes aerial opponents, practically eliminating all of the move's offensive capability in Fox's edgeguarding. When Fox reflects a projectile on the ground, during the reflector's animation change Fox can cancel the move into a roll, spot dodge or jump by making the appropriate directional input. As a result, when pulling out the reflector on the same frame a projectile reaches it, it will almost always result in Fox spot dodge canceling it, due to the player having to push down on the control stick to activate the move.

In Melee, Falco's Reflector animation is identical to Fox's and additionally, Falco can also jump cancel his reflector, allowing him to wavedash out of it. The knockback on the move sends opponents upward, meaning he cannot combo most opponents with consecutive waveshines like Fox can. Falco's reflector, however, does combo into other aerials, particularly his down air to create the combo string known as pillaring which consists of excessive use of the reflector, down air, and up tilt. This potential means Falco's reflector has the potential for more extended combos. The vertical angle of his reflector also means Falco cannot edgeguard with it, but because of the move's high base knockback, Falco can combo consecutive shines for vertical KOs.

In Brawl, how Falco uses his Reflector is much different, as he now kicks it away in front of him when it is activated. It then returns to him as if magnetized. This serves not only as a reflector, but also as an unorthodox, but relatively unrewarding poke option in neutral. It can occasionally trip opponents, leaving them vulnerable to tech chases, but if the move doesn't trip, it is highly punishable. The Reflector's hitbox now also has a horizontal angle like Fox's, though it is weaker when used against airborne opponents, and doesn't grant invincibility frames anymore. It can travel through enemies unhindered, though. Also, since Falco kicks it, he cannot hold it in place, unlike Fox. This means that timing is crucial in reflecting projectiles. Note that when the Reflector comes back to Falco, it can also reflect any projectiles back at any angle at the last second.

In SSB4, the Reflector's hitbox can itself be reflected, though this does not affect its trajectory, and practically means it will just damage Falco instead of the opponent if the hitbox collides with him (or has not travelled far enough away yet). Visually, the move is unchanged, though Falco's animation for the move is more fluid and he catches his reflector when the move ends instead of it just disappearing. It still trips opponents at low percentages, but because of the higher hitstun in SSB4 and the move is additionally faster, the move is a safer and more reliable poking option than Brawl's version.

In Ultimate, Falco's Reflector can no longer be reflected, much like in Brawl. Additionally, it no longer has a chance of tripping opponents. 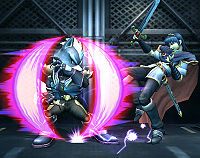 Wolf's reflector differs from Fox's and Falco's in appearance, resembling a pink, elliptical "cat's eye" as opposed to a blue hexagonal shape, and Wolf carries his reflecting device on his back instead of his belt. Compared to the other two Reflectors, it gives less power to projectiles (1.3x instead of 1.5x), instead giving them a boost to 1.8 times their initial speed. The reflector is activated in one frame and can be held for as long as desired. When used, the first few frames of Wolf's reflect provide him with invincibility, followed by a "zap" that deals 3% and a small amount of set knockback to any opponents touching it; the least knockback of all reflectors. If the special button is held, it will then function as a projectile deflector, but leave Wolf vulnerable to physical attacks, otherwise it ceases after a short cool-down period. The initial frames of Wolf's reflector can operate as a sort of "counter": invincibility is used to avoid an attack, then the reflector damages the attacker. Unlike Fox's Reflector, Wolf's Reflector will not reduce his falling speed.

In Super Smash Bros. Ultimate, Wolf takes out a device to activate his reflector.

There are are a few techniques regarding the reflector one can use with Fox within Melee.

Fox can perform a technique referred to as Chillin dashing, named after Chillindude829, in Super Smash Bros. Melee. It is performed by running off the edge, and at the moment the character is going to fall off, the character must use the Reflector and perform a jump shine. Covering a decent distance, it is useful for edgeguarding. It is generally followed up by a jump canceled back aerial. A pseudo-Chillin dashing can be performed in Super Smash Bros.; however, since Fox cannot jump out of his shine, it would only work to edgeguard against recoveries.

Similar to shield platform dropping, this technique is done by performing a shine while on a soft platform, and then dropping through it by pressing down on the control stick. This technique is the trigger to activate Shine Mines.

Fox's shine mine in Melee.

Fox can also perform a technique referred to as Shine Mining, a term coined and discovered by Darktooth, in Super Smash Bros. Melee. It is performed by first shining in the location the player wishes to leave the shine mine. Then, when the player wishes to activate the mine, he/she must perform a shine drop through a platform anywhere on stage, and the mine will become an active reflector for exactly two frames starting from the 2nd frame after activation. It is important to note that the mine does not have the knockback and damage properties of the initial frames of a normal reflector - it can only reflect projectiles. The limited uses and difficult input timing make this technique extremely situational, but it can be used in various ways for edge-guarding.

In Super Smash Bros. Melee Fox (along with Falco) can grab immediately out of a shine. This is possible because shine is interruptible with a jump which from there the player can perform a jump-canceled grab. The resulting animation shows a shine immediately followed by a grab. This is useful because when performed on an opponent's shield, if the shine doesn't hit then the grab will due to the grab's property of beating shields. This technique isn't unbeatable however. If one predicts can predict a shine grab or other techniques, he can roll away before the grab is performed. This particular situation plays into the role of mindgames.

Like most of Fox's, Falco's and, Wolf's moves, the Reflector is unique to the Super Smash Bros. series, but may have been inspired by the Arwing's ability to deflect enemy fire by doing a Barrel Roll. As revealed in Brawl, Slippy is the Reflector's original designer, and provided Fox and Falco with this special equipment for the occasion of fighting. Fox's energy shield shape as a hexagon might also reference the shape of the Supply rings in Star Fox 64. Up until Brawl, there was no sign of how Fox activated his Reflectors, as he simply held a stance and the energy shield simply "appeared" around them. However, Subspace Emissary and the Star Fox cast's redesigns in Brawl revealed that their reflectors were miniature devices that activated on a swipe of their hands. These devices would later make their first canonical appearance in Star Fox Zero, once again attached to Fox and Falco's belts but serving no purpose in gameplay.