From SmashWiki, the Super Smash Bros. wiki
< User:Xtra3678
Jump to navigationJump to search

For the item with a similar name, see Rage Blaster

Blaster (ブラスター, Blaster) (called Blaster Shot in Super Smash Bros.) is Fox's. Falco's, and Wolf's neutral special move throughout the Super Smash Bros. series. The attack consists of firing shots from a laser gun to damage far away opponents. All 3 of the Starfox characters have a different blaster each with their own properties, however they are all done with the same neutral special input.

In Smash 64, the Blaster shoots a pink laser beam that travels slower than a standard Ray Gun shot, does 5%-6% damage, and has good knockback for how quick it is. The Blaster has increased fire rate while Fox is airborne allowing Fox to short hop double laser. Fox overall is considered among competitive players to have one of the best projectiles in Smash 64 due to its hitstun, speed, and damage. This version returned as a custom move in Smash 4, named "Impact Blaster".

In Melee, Fox's Blaster is quite different compared to the original in Smash 64; it has a faster rate of fire and traveling speed is drastically increased, but it also has no knockback or hitstun and does 1%-3% damage per shot (the lack of hitstun/knockback also applies to the Blaster being used in Fox's up, down and back throws). This is one of the few moves in the game that can never provide a KO except by stealing other players' KO's. It is mainly used from long range (as short hop lasers or short hop double lasers) to camp and bring up damage for an up throw→up aerial combo or up smash. It should be avoided while standing as there is ending lag. Its spammability gives it a more indirect function in unstaling the rest of Fox's moves, particularly reliable KO moves such as up aerial and up smash, without being heavily impacted by staleness itself.

In Brawl, Fox's Blaster has once again changed: the range of the Blaster now travels roughly half of its previous distance. His blaster inflicts 3% per shot before move decay sets in. Fox is also now capable of a short hop triple laser, allowing him to inflict more damage on opponents falling to the stage. It is similar to Melee in extent to its use for camping. It is also used after auto-canceled aerials to reduce landing lag and after forward aerials usually or after jumping from the ledge.

The Blaster is Falco's neutral special move in his Melee incarnation, which shoots a laser gun to damage faraway opponents. It is significantly different from that of Fox's: the Blaster has a slower firing rate and longer end lag, (though it fires faster in the air, but not as fast as Fox's), and each beam stuns the opponent in addition to doing damage. Falco's Blaster closely resembles Fox's Blaster as it appeared in the original Super Smash Bros. The end lag can be skipped if used during a short hop. Falco's Blaster is mainly used from long range to build damage for later KO attempts and as an aid in approaching. It has set knockback. It is also used for setting up KOs, especially versus Captain Falcon and Ganondorf, since it can be fired numerous times off the ledge to force these characters to recover each time.

In Brawl, the beams from Falco's Blaster travel farther than the beams from Fox's, and they are blue instead of red. They now also have an electric effect as well. They are very similar to Fox's lasers from Super Smash Bros. outside of doing less damage. It is considered to be one of the best projectiles in the game as it has transcendent priority and disrupts the approach of a majority of the cast. This is by exploiting short hop double lasers to shoot one laser in the air and one in the ground. Combined with Falco Phantasm, throws, and his dash attack, this is a common Falco approach. It is also be used to Lock commonly after a Jab Cancel and to "combo" at various damage percentages into a DACUS or forward smash. Also, similar to Melee but to a lesser extent, Falco's lasers can also be used to set up edgeguards.

In Super Smash Bros. 4, the move now has landing lag and cannot be fired as frequently, rendering the short hop laser technique much less viable.

In Brawl, characters can become trapped in a lying-down animation, called Laser Lock, if hit repeatedly with Falco's Blaster once they hit the ground. The laser lock may also be done after a down aerial by Falco toward the ground if the opponent does not roll off the floor. The laser lock does not work on all characters. The thinner characters will lie under the laser just barely. 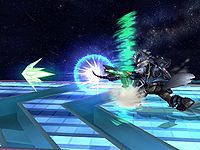 It is a gun with a bayonet attached beneath its barrel, that fires green (purple in Ultimate) projectile lasers. Its firing rate is much slower than that of Fox and Falco's counterpart weapons, as Wolf is animated drawing and holstering it for each shot, and its range is the shortest, with lasers that travel about two-thirds of the length of Final Destination. However, its shots deal a small amount of knockback that is not set, and 5-6% damage. When fired from the ground, the vertical range of the lasers' hitboxes make contact with the floor, and will hit any ducking or crawling opponent (such as a ducking Kirby), and can detonate any down smash mines that Snake may have laid. It should be noted that the damage dealt by each laser lessens slightly as it travels forward. Wolf's blaster's biggest change from the other 2 blasters is that he has a Melee attack on his blaster. Due to a bayonet appointed on the front of his blaster, when the move is used he swings into the air afterwards dealing an extra 5% damage and considerable knockback. This can make a single blast from the blaster deal 10-11%, the most possible from a single shot of all 3 blasters. 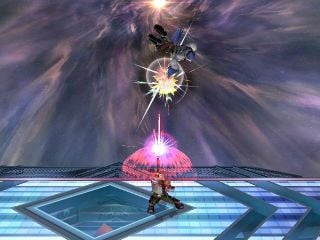 Fox's Blaster used as an up throw in Brawl.

From Melee onward, Fox uses his Blaster in his back, up, and down throws. In Melee, during his down throw, Fox will throw his opponents to the ground, and shoot them with the Blaster. The throw meteor smashes the opponent into the ground, which allows Fox to tech chase, possibly leading into Shine combos. Fox's will overall deal 4% damage. In Brawl, the throws deal more damage, with Fox inflicting a total of 9% damage, but throwing the opponent in different trajectories. Fox's throws the opponent in a diagonal trajectory with high base knockback. In SSB4, it is semi-reliable in starting combos with a into forward aerial, back aerial, or up aerial. Note that Fox's Blaster in throws will have the same effect used in the neutral special, as it has no knockback. Additionally, the lasers in his back and up throws are susceptible to DI, but in Smash 4 onwards this is more difficult.

In Melee, for his back throw, Fox will turn around and throw his opponent backwards in a horizontal trajectory, while simultaneously shooting them rapidly with the Blaster. Fox's blaster deals 7% damage. In Brawl, Fox's throw inflicts 8% in damage. The throws inflict high base knockback, but extremely low knockback scaling, preventing it from ever being able to KO.

Fox's up throw involves throwing the opponent up, while then following up with rapid Blaster shots. In Melee, Fox's throw deals up to 7% in damage, and is highly effective at setting up aerial follow ups, particularly into Fox's powerful up aerial. In Brawl, the throw deals up to 8% in damage, but increased base knockback and Brawl's decreased hitstun has hindered its capability at setting up aerial followups. 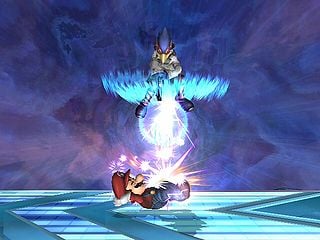 Falco's down throw in Brawl.

Falco also uses his Blaster in his back, up, and down throws; in Melee and Brawl, he fires three laser shots during each of these throws, much like Fox, but instead fires a single powerful shot during them in SSB4 and Ultimate.

In Melee, during his down throw, Falco will throw his opponent to the ground, and shoot them with his Blaster. The throw meteor smashes the opponent into the ground, which allows Falco to tech-chase, possibly leading into Shine combos. The throw will deal 4% to 5% damage. In Brawl, the throw deals more damage (a total of 9%) but throws the opponent in a weak horizontal trajectory. It is particularly notorious for being a highly effective chain throw in Brawl that can chain grab most characters, with strong follow up capability into high percents. In SSB4, it can start combos both in the air and on the ground at lower percentages, or a back aerial at medium percentages. In Ultimate, the throw has a new animation where Falco gently lays the opponent on the floor before firing a laser shot from his Blaster at them.

In Melee, for his back throw, Falco will turn around and throw his opponent backwards in a horizontal trajectory, while simultaneously shooting them rapidly with his Blaster. The Blaster deals 7% damage. In Brawl, the throw inflicts 8% in damage. The throw inflicts high base knockback, but extremely low knockback scaling, preventing it from ever being able to KO. In SSB4, the laser can KO around 150% near an edge.

Interestingly, the lasers in all three of the throws can be reflected and absorbed for both Fox and Falco, much like Mewtwo's forward throw.

Fox, and Falco's up, back and down throws deal damage from both the actual throw and the lasers fired after the opponent is thrown. Fox's and Falco's down throws use different damage values Fox's official artwork in Star Fox 64 depicts him with a blaster.

Fox first uses a blaster in Star Fox 64's multiplayer and is depicted with one in artwork and screenshots. Falco, Slippy, and Peppy also use blasters in the game's multiplayer while on the ground. Their blasters were not officially named Blasters in the Star Fox series until Star Fox Adventures, where Fox questions not being able to bring it to Sauria to General Pepper. In every game, Fox's blaster design seems to be identical to the one used in Star Fox 64, despite its upgraded appearance in Assault. One of Fox's Custom variants references the Assault blaster's charge capabilities. Wolf's blaster doesn't originate from any game and is original to Smash Bros.