Smash 2 is a gameplay modification of Super Smash Bros. Brawl designed to make the gameplay more closely resemble that of Super Smash Bros. Melee, as well as Super Smash Bros. Unlike Project M, the character models, stages and feel of the game are completely refurbished and made to look like a true sequel to Melee, hence the name Smash 2. Smash 2 best replicates Melee, matching the tier, speed and overall gameplay of Melee, many mechanics and features of Melee make the characters look like their 2001 counterparts with total redesigns and moveset changes, such as Lucas, Wario, Sonic and Snake.

Smash 2 has had positive feedback from youtubers and fellow gamers/smashers. praising it for its smooth polish and gameplay.

Smash 2 is a unqiue mod in the sense that every aspect of its base game, Brawl, has been overhauled to be identical to Melee in almost every aspect. Changes include recreating Melee's menu, as well as giving characters their design, moveset, voices and sound effects from their appearance in Melee. While not a full 1:1 recreation based on limitations and flavor reasons, the mod is faithful to its inspiration and meant to appeal gamers that enjoyed Melee both aesthetically and for its gameplay. The mod also includes content not in Melee's final product, based on a "what if" scenario had Masahiro Sakurai included more content for the game if its development was not rushed. 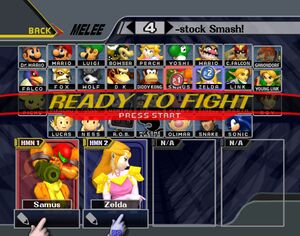 The character-selection screen in Smash 2.

The roster given for the mod is mostly inspired from Melee, as every character from that game makes their return here; from the ones who seemed most obvious to be brought in like Mario and Link, to the more obscure picks like Pichu and Young Link. All of their alternate costumes also remain intact, with some of the characters even gaining at least one new costume.

There are also 10 characters in the mod that weren't playable in Melee, all with drastic moveset changes and adjustments that make them behave as if they were official characters in Melee. These characters are Diddy Kong, Zero Suit Samus (renamed Suitless Samus in this mod), King Dedede, Wolf, Lucas, Wario, R.O.B., Olimar, Snake and Sonic.

Players also have the ability to play as Suitless Samus and Sheik from the character select if they so choose to hold down the shield button when choosing Samus and Zelda as their playable character and proceed to the next screen, at which point they can stop holding it down. If done successfully, they should enter the match as either Suitless Samus or Sheik, depending on who the player picked as their character.

There have been plans to bring Meta Knight and Pit into the game, but them appearing is up for unconfirmed. A former member of the Smash 2 project confirmed that two new unique characters were planned but were scrapped before the project was inevitably canceled; these characters are Alm and Togepi, who would have replaced Ike and Lucario respectively.

*: Characters not in Melee

Most of the stages in Smash 2 are made to function similar to that of their Melee counterparts, though not entirely. Every stage also has a main and alternate music track similar to Melee, which can be activated if the player holds down the shield button while they're selecting the stage of choice. There is some exceptions, and that is that Battlefield and Final Destination have a third track that can play if it's value in My Music is set to be higher than the main track. The alternate tracks listed are bolded while the exceptions for these alternate tracks are in italics.

*: Stages not in Melee

The following characters were removed from the game